A STAR [LORD] IS BORN..."GUARDIANS OF THE GALAXY" Is a Gamble That Pays Off With Interest.

Of all the movies in Marvel Studio's current staple, Guardians of the Galaxy was the hardest sell as there was virtually no name or brand recognition with the public at large, and even comics enthusiasts were left with a slight case of head scratching at the idea. As such, this was Marvel's biggest gamble, the one film that had the most probability of being the first major...possibly disastrous...flop of it's impressive cinematic track record since the Iron Man six years ago.

Given the presentation, Marvel Studios has absolutely nothing to worry about. Guardians of the Galaxy is everything a summer sci-fi popcorn flick should be.

During the lead up to release it's been described as the figurative love child of Star Wars and Firefly and, while there are similarities to both (unsurprising, since much of Marvel's original space opera epics were heavily influenced by the former, even discounting the fact that the company held the comics license for it), triple threat director James Gunn (who serves as director, primary writer, and very minor actor) manages to take those tropes and rework them into something fresh even as it trods familiar territory.

The story begins in the late 80's when young Peter Quill (Wyatt Oleff) is alien abducted soon after his mother's succumbing to cancer.  Decades later, the grown up Quill (Chris Pratt) is a rakish rouge bounty hunter going by the name "Star Lord" who is on the hunt for an Orb of mysterious origin and power.  When he refuses to give said Orb to his employer/father figure Yondu Udonta the Centaurian (Michael Rooker), Udonta puts a bounty on Quill's head that attracts the likes of Rocket (a cybernetic raccoon voiced by Bradley Cooper) and a Tolkien-esque tree named Groot (Vin Diesel, who probably did not have to spend a lot of time rehearsing his lines). Meanwhile, a interstellar Kree religious zealot/despot named Ronin (Lee Pace) sends a "daughter" of Thanos (first seen at the end of Marvel's The Avengers) named Gamora ("Uhura" as Orion Slave Girl Zoe Saldana), a trained assassin of considerable skill, to retrieve the Orb for his own nefarious purpose.  In their mad gamble to retrieve the film's MacGuffin, they come across Drax the (self-proclaimed) Destroyer (Dave Bautista), who loves solely for revenge against Ronin and Thanos for the death of his family. 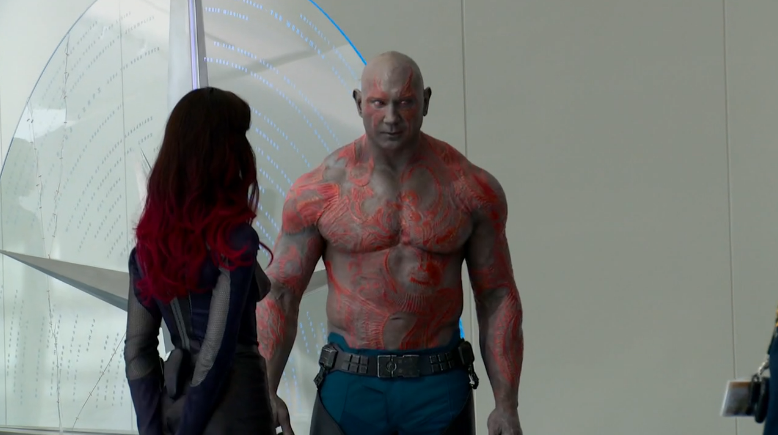 Why would I check myself out? Is there something wrong with me?
While the main story sounds very straightforward, it is surprisingly and entertainingly not. The film has a strong ironic bent, yet it is perhaps the most sincerely unironic modern sci fi film in terms of it's overall themes of family and righteous action for its own sake.  One of the most amazing things about the film it is that it's so bright! Even at it's darkness there's a pastiche of mesmerizing color. On the flip side, the planet Xandar, home of the Nova Corps (Think Green Lantern Corps with cooler outfits), is the inevitable result of Epcot and Tomorrowland over-running the state of Florida. No matter how you feel about Disney's theme parks, it's an impressive sight. The soundtrack is a combination of the compositions of Tyler Bates and an 60's/70's rock mix tape, encapsulating the tone of the irreverent space epic. The film's CGI is spectacular, even if the 3D presentation does reveal its weak spots as per usual. The visual style is a combination of retro and modern.  Again, influences of previous sci fi films are in evidence, such as Star Wars, Blade Runner, The Fifth Element, and so forth. But here they're combined to provide something that, if not quite new, is at least fresh. It is a visual feast and one worthy of the 3D presentation. In fact, the movie's visuals blend with the selected rock anthems of the 60's and 70's to create an aesthetic evocative of films like Heavy Metal (1981), some shots taking their cues from the works of Frank Frazetta and Boris Vallejo. Speaking further on the score, Tyler Bates possibly cribs certain stylistic motifs from Iron Man 3 and Thor: The Dark World (both scored by Brian Tyler). Given the former film's secular tone and the latter's mythical bent, Bates' efforts here fit this movie's sardonic yet operatic bent while at the same time complimenting the Billboard Top 40 soundtrack.
But like any film, it is the performances that either buoy or sink a production. As the Captain Kirk/Han Solo amalgam Peter Quill, Chris Pratt proves he'll never have to be relegated to playing just "the friend" again. He's rakishly lovable; a straight version of Spaceball's Lone Star, presenting an earnest, forthright performance even as his character tries to establish himself as an interstellar bad ass. Zoe Saldana's Gamora is a more than capable warrior, with a soft center belied by the tough exterior. The biggest casting gambles in this production were Rocket and Groot.  To say that the two of them steal the movie is an understatement. There's no "cute and cuddly" here.  Rocket is perhaps the most capable of the misfit Guardians, and its presentation in character, both in performance and CGI, gives credence to it. As the main antagonist Ronin, Lee Pace's performance is noteworthy. He makes himself a force to be reckoned with, and one wishes that it were he that Thor had to battle against in Thor: The Dark World.  In what amounts to an extended CGI cameo, Josh Brolin lays to rest any fears about a Texan-drawled Thanos, who emanates menace in a small scene that leaves you wanting more. The most surprising acting standouts in the film, however, are Bautista and Rooker. Drax's character has no grasp of metaphor, which Bautista uses to great comedic effect, proving he's more versatile than one would have believed. As Yondu (in the film the head of the bounty hunters known as The Ravagers but in the comics was a founding member of the Guardians) Rooker is reminiscent of Jason Robard's Cheyenne from 1968's Once Upon A Time In The West, if that character were played by a cross between Woody Harrelson, Mr. T., and Wesley Snipes in blueface. A noted character actor, Rooker has never seemed to have as much fun in character as he seems to have in this one; which is especially evident in a scene that takes place in an alien pawn shop. The story is engaging and tightly paced (even despite a couple of scene drags involving John C. Reilly as a Nova Corps member), which strikes an appropriate balance between tongue-in-cheekiness and sincerity. 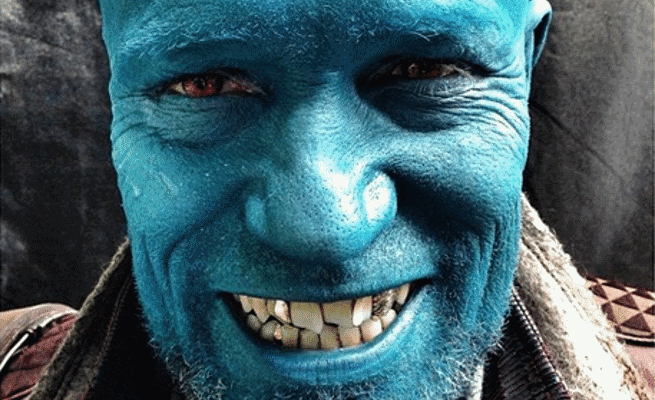 I pity the fool who messes with my hemp and my blade.
In short, if you have any trepidation about seeing this film, don't.  Guardians of the Galaxy serves as the apex of this summer's action fantasy output. It works despite (and perhaps because of) it's lack of cultural identity. Without the baggage that comes from preconceived notions, it surpasses all expectation (or lack thereof); a cinematic rockabilly, rollickin' good time. Reportedly, Marvel Studios has already announced Guardians of the Galaxy: War of Kings for a July 28, 2017 release date.

In my opinion, that date cannot come soon enough.
Posted by Paul Llossas at 1:52 PM 6 comments:

SOMBER DAWNING: Despite Some Minor Flaws, “Dawn Of The Planet Of The Apes” Is A Marvel To Behold.