YAWN OF JUSTICE: "Batman v. Superman: Dawn of Justice" Is High On Visuals, But Low In Enjoyment [MINOR SPOILERS] 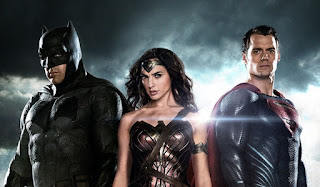 Batman v. Superman: Dawn of Justice, directed by Zach Snyder and screenwritten by David S. Goyer and Chris Terrio, is a direct continuation of Synder's 2012 effort Man of Steel. The plot, such as it is, begins with a rehash of the infamous “Battle for Metropolis” viewed from the ground zero vantage point of Bruce Wayne/Batman (Ben Affleck). Almost two years later, Superman (Henry Cavill) has become both a fixture on the world stage, and a source of international controversy. Batman, however, is convinced that Superman is the harbinger of Earth’s destruction, and sees only one way to eliminate that threat. In that vein, he crosses the path of not only billionaire Lex Luthor (Jesse Eisenberg), who has come into possession of an item Batman desperately needs, but the mysterious Diana Prince (Gal Gadot), who is skulking about Lexcorp for her own reasons.

The characters of Batman and Superman, in their 70-plus year publishing history, are a study in contrasts, a theme that is practically beaten over the viewer’s head like a crowbar.  Like the ostensible main characters, this film is a mess of contrasts: moments of spectacle alternatively presented with moments of moribund turgidity. Or rather, it’s just a mess.  The thing here is that there are moments of almost brilliance. There are some excellent concepts and ideas to be explored. Some are unrealized, some under-developed, while others are explored in depth…those that are successfully explored unsurprisingly focus on (and this is the reason why I say “ostensible” main characters because despite the misleading title) Batman. From the way his scenes are crafted, one gets the impression that this is the real character that Snyder and Co. want to explore. For example, there are a lot of psychological underpinnings that enhance the threadbare plot such as the helplessness Wayne feels during the events birthed the Batman and ushered the arrival of Superman. There's also Batman’s quest to bring down his red caped white whale, and the irony that his character arc leads him to become the very thing he perceives Superman to be. Also, there is the compare/contrast of what Batman has lost over what Superman still has…and stands to lose.

By contrast, Superman gets the short shrift; existing more as a MacGuffin than a co-starring character until the film’s final act. If nothing else, this presentation highlights the fact the filmmakers don’t know what to do with him as a character (at best) or outright dislike him (at worst). I wonder if it is more than coincidental (other than Warner Bros. blinking at a Marvel cinematic stand-off between  BvS and the forthcoming Captain America: Civil War) that this film premiered on Easter weekend, because the “Superman-as-Christ” allusions were has heavy-handed as the rhetoric at a Donald Trump rally (yes, even more so than in MoS). The modern arguments against Superman as a character are pervasive here and even stated in dialogue:  He’s unapproachable. He’s something to be feared. He’s not one of us. He’s unrelatable. What moments of humanity he is allowed to show are tied to the women in his life, mainly Lois Lane (Amy Adams) and Martha Kent (Diane Lane), As such, this lack of character development for Superman is evident in Cavill’s performance. The hint an optimistic take of the character hinted at the very end of Man of Steel is not carried through. Clark Kent is still burdened by the mantle, and spouts meta dialogue about his critics that may be Snyder’s way of saying “f*** you” to those who found MoS wanting. Good as he is with what little is given, Cavill could stand to utilize some of the charm he utilized as Napoleon Solo in the recent The Man From U.N.C.L.E. In his defense, there's little room for him to utilize it here.

The skeleton of this film comes from two DC Comics story lines from the late ‘80s and early 90s (one is The Dark Knight Returns; to name the other would give away a major plot point); and Ben Affleck’s version of Batman is based upon the former. As much of a revelation Affleck is in the role, as he arguably fits as both Wayne and Batman, this Batman has one major tweak from the story source. The DKR Batman was reluctant to kill, while this one kills with impunity, either directly or indirectly via bat-branding. It seems that in Synder’s view, superheroes have to be brooding killers in order to be effective.  Where’s the fun in that?

At least it looks like the supporting cast is having some fun. Jeremy Irons is appropriately droll as Wayne retainer/weapons manufacture Alfred Pennyworth, spouting lines lifted directly from “The Dark Knight Returns” with pitch-perfect scathing wit. He also serves as Bruce’s conscience and surprising supporter of Superman. On the flip side, Lawrence Fishburne’s Perry White is more entertaining than in the first film, being the gruff editor who once in a blue moon evinces a paternal side, even as he's lambasting his star reporters. As discordant as his Sherlock Holmes/Pirates of the Caribbean pastiche theme, Eisenberg’s Luthor is emotionally all over the place, as if someone had injected given his Mark Zuckerberg character a year’s worth of caffeine all at once, giving a manic performance that would have had Gene Hackman say “[w]hoa! Dial it back, son.” Yet, despite this, he does evoke the feeling that he is the smartest man in the room, even if (what passes for) the story structure doesn’t support the assertion.

One of the more confounding aspects of this film is its treatment of the female characters. Amy Adams’ Lois has not lost any of her spunk, but she still ultimately exists in deference to Superman. Despite the inner resolve that Adams imbues her character with, Lois goes back to traditionally finding herself in a jam to be rescued from. Further, she and Martha Kent seem to exist in this film as anchors to Superman’s humanity, a fact that is exploited. To be sure, this is a disservice to both accomplished thespians, but they make the most of their roles (though Ms. Lane does share an extremely humorous moment with a Hollywoodland co-star).  And no, I’m not forgetting Gal Gadot as Wonder Woman. To be honest, her character is, for most of the movie, a cog in the hinting machine for the forthcoming Justice League. But she later becomes the deux ex machina in the film’s climax; however, for her part, she nails the role when she  stands revealed as (the still unnamed) Wonder Woman and, in one blink or you’ll miss it moment, she takes a moment that beautifully realizes the character completely. Her arrival, backed by a rollicking, guitar strumming theme, is a welcome addition (Xena who?). It may be short, but it is definitely sweet. More importantly, hers is the only introduction that remotely resembles anything powerful or heroic. When Superman and Batman are introduced, it’s done matter-of-factly sans any fanfare. Given what this film is trying to do and the characters being used, wouldn’t it be appropriate to give each hero’s initial entrance the importance they deserve? Is it that embarrassing to the filmmakers to express the epic nature of their titular protagonists? That corny? Don’t expect Hans Zimmer and Junkie XL’s score to imply heroism, though Batman’s new cacophonous sturm und drang theme acts as counterpoint to the MoS Superman theme, and works within the context of the film.

The spectacle overshadows the plot, which relies too much on coincidence at some points to get from points A to Z. Now, as of this writing there will be a three-hour, R-rated cut of the film to be released on blu-ray which will incorporate deleted scenes that address some of these narrative issues. Nevertheless, one shouldn't have to wait for a subsequent home video release to make up for storytelling shortcomings on initial release. The action scenes are ambitious and riveting...and would be more so if you could actually see them. In more than a few cases, these scenes take place either at night or in the dark and the frenetic pacing of the action coupled with the lighting make some of the events too indistinct to properly make out. Point taken. This is a dark take on superheroes. At least let the audience see them in action clearly. Given that, the run time is frankly too long. It seemingly takes forever to get to the film's purpose of seeing Supes and Bats trading fisticuffs.


There are times that a movie’s story telling success is made or broken at the film’s climax. While it is technically unfair to do so, as a film should be judged solely on its own merit, I have to bring up a telling observation. When Marvel’s The Avengers (2012) fully assembled The Avengers on screen during its climatic battle, the audience cheering was deafening. For the first time, the DC trinity is brought together in live action and the audience response at my screening was…nil.  Granted, it could have been ruined by the fact that the shot has appeared online for at the very least a six months to a year, which could have diluted the impact of the moment. But then again, Avengers had a similar marketing strategy and, arguably, there had been years of build up with previous Marvel films. Yet, this particular event has been wished for since, oh, take your pick, the Adam West Batman, the Lynda Carter Wonder Woman, the Christopher Reeve Superman: The Movie…when the union happens, it feels…unearned. Perhaps it’s because there’s no real sense of heroism evident here; or rather, the feeling of it. Lip service is paid to it, but cynically so. The DC heroes, traditionally, have been aspirational characters; a hallmark that the Marvel Studios seemed to have appropriated. There's nothing to aspire to here. Warner Bros. insistence of being the “anti-Marvel” goes way too far and to both the parent company’s and characters’ detriment. Paranoia, fear…this is the world we’ve inherited post-9/11, and it has been infused into these heroes; so much so that there is no joy in the Snyderverse. There's a lot of bang for buck here, but its mostly well-executed choreographed moments, source material homages, and visual razzmatazz but with no real emotional hook; so much so that the climax, which should have affected me deeply, left me at "meh."  If and when you see the film, you'll understand why that's an issue. The film is too busy trying to world build a franchise in two-and-a-half hours while forgetting that it needs to give us a reason to want to visit that world.

I wanted to like this film as both a critic and a lifelong fan of these characters. To that end, as a visual spectacle, I found it more enjoyable than Man of Steel; which isn't saying much. It does have a lot going for it. Affleck naysayers will have to eat some bat guano. Maybe Batman could use a little dose of humor, but he's an accurate representation of the character's comic presentation from the mid-90s to the present. Gal Gadot shows promise as Wonder Woman and it will be interesting to see how she does with more screen time in her coming stand-alone film. The story is meandering and frustrating at times, but boy it sure is purdy t'look at...when there's enough light to see by.

Batman v. Superman: Dawn of Justice had a lot of promise. It has some enjoyable stand-alone moments, and it plants some interesting seeds for future DC live action films. As a whole, however, its a big, bombastic letdown. As Luthor alludes to the story of Icarus in film, it so serves as apt metaphor here. BvS reaches for the heavens, tries to reach the sun, but is ultimately brought down and consumed by its own darkness.
Posted by Paul Llossas at 4:38 PM 9 comments: