NO PUSSYFOOTING AROUND: “Hardcore Henry” Is An Ambitious And Successful Cinematic Experiment 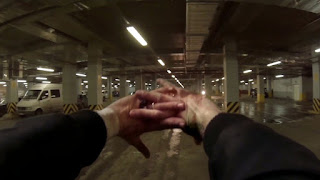 Rarely does a film's opening credits tell the audience exactly what sort of experience they’re in for. Hardcore Henry does exactly that with in-your-face, cringe-worthy, gleeful detail. It also implies that it’s about to offer a cinematic experience unlike any other; a declaration it lives up to. 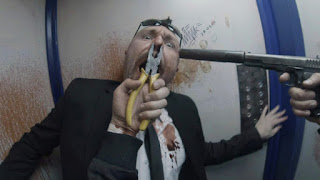 Told you it was in your face.

You star as “Henry”, a resurrected cyborg with no memory of your past. It’s not long after you’ve been treated by your doctor wife, Estelle (Haley Bennett) before you’re attacked and Estelle is kidnapped by an industrialist warlord named Akan (Andrei Dementiev) and his band of mercenaries and chased through the streets of Moscow.  With the help of the mysterious Jimmy (Sharlto Copley, District 9, Malifecent, The A-Team), you try to avoid capture and find out why to…

Yes, I said “you”.  Hardcore Henry is shot entirely in POV perspective, akin to a live-action first-person shooter game. First-time feature film director and main screenwriter Ilya Naishuller really pushes POV gaming aesthetic in every frame, complete with the pastiche that goes with it. The film, shot entirely with GoPro Hero3 Black Edition cameras, allows you the viewer to experience the film in “real time” as Henry does. This conceit is the film’s main draw.  Don't expect character depth or plot complexity save for the requisite twists and turns that you would expect in an action film in general, or a “shoot-‘em-up” game in particular. Do expect unrelenting, high-octane pacing from start to finish, wherein the quiet moments, few that there are, are still taut with tension. 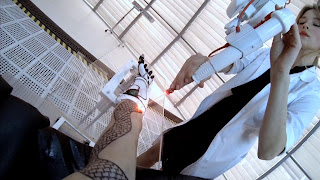 This is the quiet part

While revolutionary, this first-person perspective is not without its weaknesses. The first issue is that of cinematic limitation. A film narrative is a fixed one.  One may mix and match scenes in different chronological order as opposed to linear storytelling (think Pulp Fiction), but no matter how the frames are stitched, the film is still fixed in narrative.  In games, video or otherwise, the player has to make choices in order to advance.  The problem here, and this will be especially true for avid gamers, is that the lack of audience control mutes the experience’s potency. The protagonist-as-viewer is illusory because there is no emotional connection to Henry himself. Viewers are only as emotionally invested in a narrative as they allow themselves to be; especially in cases when one is experiencing first person events visually, but not viscerally. It is not happening to the real “you”, which is the central problem with telling stories in the second person (in a literary narrative) or in the first person (visually). If we're not completely vested as a character by proxy, then we can't really feel what the protagonist is feeling. To his credit, Naishuller tries to approximate this, but he can only do so much. The viewer is not the protagonist; just along for the ride. While the “golly-gee-whiz” visuals are compellingly impressive, one cannot fully immerse themselves into whatever Henry's emotional journey is, if there is one. Quite honestly, this is one of those few films that I would recommend seeing it in 3D (if you can manage it; see below), if available, and more importantly, worth the extra expense to experience it in Dbox seating, as that will be the closest thing you will get to a virtually reality experience here. 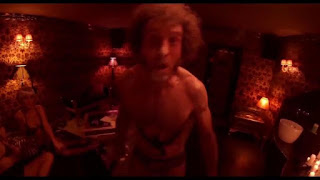 Um, skip the Dbox for this moment.

The second issue is more individually subjective. While kudos go to the various-GoPro attired stuntmen who performed the dazzling stunt work and the editing of Steve Mirkovich, without whom the film would have no power or urgency. They do their job so well that this film could have had “Headache Henry” as an alternate title.  In fact, I'm surprised that there weren’t disclaimers at the film’s beginning because the film is so frenetic and spastic that it could possibly trigger an epileptic seizure and some people (and that’s without 3D and Dbox). Further, the point of view doesn’t always allow for a clear understanding of the events that goes on around Henry. Granted, that’s part and parcel with attempting to mirror real life. You don’t necessarily see what’s going on around you or see how it physically affects Henry, but this is a very minor quibble because the film moves with the speed of a cross-country Japanese super-train without stops; you’re carried to the next series of events while you’re still trying to process what just happened. Note there will be situations wherein the “whys” go unanswered. Roll with it.

The film’s main draw is the experience, and the director gleefully ratchets the action, gore, and absurdity to upper-Tarantino-ian levels; the latter of which is where most of the film’s humor resides. Naishuller pushes the boundaries of taste (and decency), but in such an absurd fashion that it strays into camp, in turns reveling in even as it mock’s its misogynistic and testosterone-fueled conventions. Film composer Darya Charusha’s musical choices match the tonality of this quixotic, chaotic match up, mixing Junkie XL scoring with soulful, old school classics like Queen’s "Don’t Stop Me Now” and the Temptations’ “My Girl” in situations so incongruous for the scenes they’re used they render them hilariously. 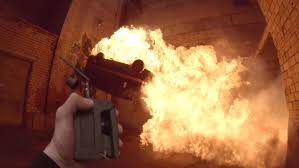 As far as dramatis personae, the characters are as superficial as you would expect in a video game (That’s not a criticism). As “Estelle”, Haley Bennet’s character is just above stock. She starts Henry on his journey and serves as damsel in distress. As “Akan”, Andrei Dementiev seems to have not only studied at the Jesse Eisenberg School of Comic Book Villainy, but seems compelled to surpass his lessons. 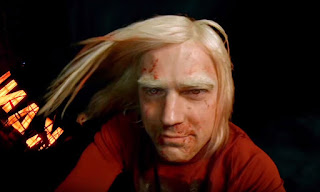 Tim Roth has a brief but amusing cameo as Henry’s father. The best performance in this film Sharlto Copley’s “Jimmy” as he provides what little heart the film has; a performance infused with mania, levity, and surprising pathos. But then, who frickin' cares? For a story like this, it’s all expository stuff anyway.

On the whole, Hardcore Henry is a gonzo, absurdist joy ride filled with non-stop thrills. While that statement may be a lazy cliche in film criticism circles, Henry truly merits that description. The movie will either be a hit or miss, depending on one’s feelings about video games and nausea-inspiring visuals. Henry runs the risk of being viable only for a niche market. On the other hand, we could be witnessing the birth of a trend in cinema. Either way, this is not a film for everyone. Despite the onset of a headache, I thoroughly enjoyed the film, whereas a fellow film critic left mid-film in disgust, saying that he found the entire affair sophomoric and moronic. Whatever the opinion, one cannot deny that this film is dazzling, and dizzying, and disorienting. On the whole, Hardcore Henry is a an extremely well-executed, if somewhat jarring rollicking romp that should be applauded for its ambition and scope, if nothing else. It’s a cinematic roller coaster that hooks you by the naughty bits and doesn’t let go until literally the very end.