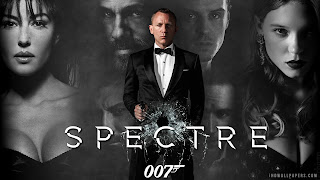 More often than not, the Bond title sequence theme songs hint at the overall tone of the films they accompany. Who can forget the Shirley Bassey, who belted out Goldfinger (1964) with a divaesque brassiness that was evocative of both the film and the titular villain, or her serenely luscious Moonraker (1979), which matched that film’s more laid back tone? Imagine Thunderball (1965) without Tom Jones’ dynamic tones whose vocal power matched the visuals of the first ever extended underwater fight sequence ever committed to film? Who can forget Tina Turner’s sultry-yet-attitude-filled rendition of Goldeneye (1995), announcing to the world that Bond was back with a vengeance? Even as recent an offering as Skyfall (2012) follows this trend: A tour-de-force performance by Adele which both paid homage to the Bassey-stylings of yesteryear and served as promise that the sins of the previous entry Quantum of Solace (2008) would soon be washed away.

Yet, after an over-the-top, visually fatiguing pre-title sequence, Sam Smith’s “The Writing On The Wall” informs us of what to expect from the rest Sam Mendes’ Spectre:  A whole lot of dull. That’s not exactly something you would hear being said about a James Bond film; especially not one as highly anticipated as a film titled "Spectre". After all, the evil organization, a thorn in Bond’s side since the first official Bond film (1962’s Dr. No), has been off limits to the producers for 44 years (34 if you count an unofficial “wink-wink, nudge-nudge” pre-title sequence in either 1981’s For Your Eyes Only or the 1983 unofficial Bond feature Never Say Never Again). But that is exactly what you get here.

Following up on a message from beyond the grave, Agent 007 (Daniel Craig) undertakes an unsanctioned mission in Mexico; the consequences of which cause not only his being benched from active duty, but embarks him on a trail (with the help of Miss Moneypenny (Naomi Harris), fish-out-of-water “Q” (Ben Whishaw), a crusty, reluctant “M” (Ralph Finnes), and Dr. Madelene Swann (Léa Seydoux), the daughter of an old enemy) that leads Bond to a secret organization known as Spectre, whose machinations stretch back further than Bond ever realized…and hits Bond more personally than he would care to admit. Meanwhile, MI6 is experiencing it’s own form of benching as an operative code-named “C” (Andrew Scott) works to consolidate the world’s intelligence agencies into one global surveillance network, effectively rendering MI6, and the “00” section, obsolete.

Spectre’s screenwriters John Logan, Neal Purvis, Robert Wade, and Jez Butterworth make good use the current cultural privacy zeitgeist as story fodder. While Skyfall leitmotif was about Bond’s obsolescence as an aging individual, Spectre ups the ante by focusing on MI6’s obsolescence as an outmoded relic in a world where 24 hour digital surveillance is now a sad reality; “Big Brother is watching you”, and Spectre succeeds in capturing the moody atmosphere that awareness would engender. Spectre is waiting in the shadows; too bad it doesn’t have teeth.

It’s hard to believe that both Skyfall and Spectre were directed by the same person. Whereas Sam Mendes’ Skyfall was tightly suspenseful, his Spectre is meanderingly listless. The action sequences, while craftily put together and are a visual delight, lack a visceral punch. Unfortunately, Thomas Newman’s score doesn’t help. While pleasing to the ear, his orchestrations don’t add the emotional impact the sequences demand; in fact, it’s arguable that they call attention to how disjointed they are.

While the film does drag, it does manage to build a credible plot filled with intrigue and distrust; at least, two thirds of the way through it.  However, by the time the film hits the third act, it’s less a cohesive story and more of a series of “what the f***” moments (and not in a good way). Character motivations and logic are practically thrown out the window in attempts at pseudo-emotional payoffs that either never come or, when they do, feel contrived and unearned. Of course, we’re talking about the Bond series of films where reality has always been either in flux or a non-issue. But, given that the credo of the Craig era has been a grittier, more realistic Bond, these issues become even more egregious in context.

Daniel Craig is a very interesting actor, given the incongruous nature of his fourth outing as the super-spy; it amazes how he can give a nuanced performance while seemingly bored with it all. His is a unique position in the Bond pantheon of actors because, unlike the previous Bonds who “reset” with each of their respective films, Craig’s films are thematically and chronologically connected, allowing him to build an actual, relatable flesh-and-blood character over time (a decade next year). But there are moments in his performance where it seems Craig’s tired of the journey; almost treading into by-the-numbers territory. Ben Whishaw (Cloud Atlas), in his second appearance as the quartermaster “Q”, is engaging as a hipster tech geek caught in an out-of-his-depth situation. While Naomi Harris’ Moneypenny is as capable and independent as she was in the previous film, her lighthearted banter with Bond, which served to humanize Bond further in the last film, is sorely missed here.

One of the bright spots performance-wise is the sparing-yet-effective use of Dave Bautista as “Mr. Hines”. Like “Oddjob” and “Jaws” before him, Hines is a big, laconic henchman assassin. While the role itself is underwritten, Bautista makes it memorable by the sheer force of his personality. He and Craig present one of the best Bond close-quarter fight scenes in the history of the series, right up there with From Russia With Love (1963) and Goldeneye. Much was made in the media of casting of Monica Bellucci as the “oldest Bond girl”; would that her role matched the hype. It is a wasteful disservice to cast the beautiful and soulful actress in what amounts to an extended expository cameo. By contrast, as Dr. Swann, Seydoux pops on screen, going toe-to-toe with Craig's Bond in terms of obstinate personality. Her chemistry with Craig is palpable, each bringing out the best acting out of the other. She presents one of the rare Bond girls who one could conceive Bond actually falling in love with (unlike, say, Dame Diana Rigg in On Her Majesty’s Secret Service (1969) - yes, I went there) and effectively gives one of the most nuanced but powerful emotional beats James Bond has ever experienced on film.

The biggest, and most disappointing, role belongs to Christopher Waltz (Inglorious Basterds; Django Unchained). As the villain of the piece and given the film’s title, it should come as no surprise who his character really is. Unfortunately, that association comes with an expectation that is realized neither in concept nor performance; especially with the revamped personal connection between his character’s and Bond’s. There’s never a sense that a shared history between the two exists. The quiet menace Waltz brought to his role of “Hans Landa” Inglorious Basterds is completely absent here and minimizes the entire impact of both the character and the film as a whole.

Visually, the film is stunning to look at. Cinematographer Hoyte Van Hoytema brings a sumptuous aesthetic with expansive vistas and long shots rivaling those of the Disney Epcot Soarin’ ride that imply a sense of the epic that this film should have had. The world in Spectre is at turns exotically beautiful and darkly foreboding. In many respects, it’s what a Bond film should look, if not feel, like.

With a two hour, twenty-eight minute runtime, Spectre is the longest Bond film to date.  Unfortunately, much of that run time is devoted to long expository sequences that exist for the sake of hubris (Yes, I'm aware there are certain quarters who don’t mind seeing Daniel Craig performing a gratuitous sexy shimmy up a flight of stairs for an extended period of time…). Here, less would have been more. Instead of working to engage the audience, the excess detracts from the spectacle, leaving the viewer to wonder how much longer it will go on before they can get on with the actual story. With some trimming and tighter editing, this film could have been engagingly pulse-pounding instead of being quite the opposite. The film’s biggest enemy is self-indulgence.

In all, Spectre is a mixed bag. It establishes a pattern much like the old original cast series of Star Trek films (odd numbered films mediocre, even numbered good) to the Craig era. In this case, it’s only slightly better than Quantum of Solace, but way below par when compared to Casino Royale (2006) or Skyfall. As a film on its own merits, it’s seriously uneven to a distracting degree. When it’s good, it’s really good. When it isn’t, it’s all the more disappointing.  It’s definitely worth viewing on the big screen if your concerns are merely visual. In terms of story and entertainment, however, waiting for cable would be your best option. As usual, the end credits promise that “James Bond Will Return.”

Let’s hope he does so in a better vehicle.