After fourteen years, viewing Disney's Pirates of the Caribbean films is kind of like experiencing the ride they're based on, akin to a warm, comfortable blanket. You wait in line, knowing nothing has really changed, but still willing to open yourself to the magic of recapturing the feeling and nostalgia of the very first experience. On the flip side, you risk irksome disappointment when a glitch or two ruins the ride. Pirates of the Caribbean: On Stranger Tides (2011) felt like the latter condition. Despite being a box office hit (minor in comparison to the previous films' individual box office booty), it's reception was both critically and commercially mixed to the extent that the franchise's future was in question. Further exacerbating the uncertainty was Depp's floundering standing as a box office draw (The Lone Ranger, Mordechai, and Black Mass all flopping resoundingly, though ironically in the latter's case it was one of the best performances of his career), With all these issues factoring in, what's a production to do in order to mitigate the possible damages?

The answer seems to be go back to the beginning.

Almost a decade in story after the events of POTC: At World's End (2007), young Henry Turner (Brenton Thwaites), son of the cursed captain of the Flying Dutchman, William Turner (Orlando Bloom), enlists the aid of the recently captured and (further) disgraced Captain Jack Sparrow (Depp), who is still without his beloved Black Pearl (after a fashion) and crew, to recover Poseidon's Trident, an artifact with the capability of destroying all sea curses. Also on the hunt for this artifact is Carina Smyth (Kaya Scodelario), a horologist accused of witchcraft who also seeks the Trident for her own purposes. As the threesome embark on this mission, they are pursued not only by British naval commander Scarfield (David Wenham, The Lord Of The Rings trilogy) and frienemy Hector Barbossa (Geoffrey Rush, looking even more resplendent this time out) but also by the spectral Capitan Salazar (Javier Bardem, No Country For Old Men; Skyfall) who seeks vengeance upon Jack for his ghostly condition.

Some moisturizer should clear that right up.

If some of this sounds vaguely familiar (at least, more familiar than usual when dealing with sequels), that would be because screenwriters Jeff Nathanson and Terry Rosario seemingly dusted off the script for POTC: The Curse Of The Black Pearl (2003) (which Rosario co-wrote) and tweaked the details. Normally, such an instance would seem egregious, but it works because it's used as a template for bringing the series full circle, and manages to seem fresh in its execution.

One of the most obvious lessons learned between the last film and this was to minimize the focus on Captain Jack (which may have been predicated by necessity of the Depp's purported behind-the-scenes shenanigans and personal upheaval. Google it if you're interested). 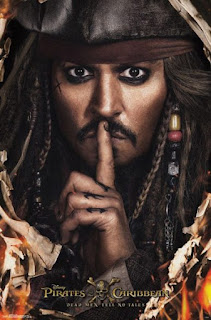 As in the first film, before he became the face of the franchise, Jack Sparrow is better realized as part of an ensemble. Which leads to another mistake rectified from the last film, a stronger ensemble cast.  As the Will Turner and Elizabeth Swann analogues, both Scodelario and Thwaites are not only engagingly charismatic on their own, but have a wholly palpable chemistry together. Regarding Barbossa, what can be said about Geoffrey Rush that hasn't been said before, other than this is perhaps the most poignant he has ever played the character. One of the biggest complaints from the last film was the underutilization of an actor of Ian McShane's caliber as "Blackbeard". Disney was certainly paying attention as the same cannot be said of Bardem as Salazar. His characterization is varied in scope, playing sympathies and menace deftly, making for one of the better realized of the series' villains. Returning Pirates alumni Kevin McNally ("Biggs"), Martin Klebba ("Marty"), Stephen Graham ("Scrum") and Angus Barnett ("Mullroy") are given more to do and add to the feeling of welcome nostalgia. Unfortunately, its not without its casting missteps, though not of the fault of the actors in any way (Wenham's Scarfield and Golshifteh Farahani as actual witch "Shansa"), but through the simple fact that the script doesn't know what to do with them. As far as Depp, his performance is somewhat uneven, varying in degrees from lazy (I suspect the major inebriation scenes did not involve acting whatsoever) to almost inspired. Luckily, its slightly more the latter than the former.

The visuals and special effects are perhaps the best in this series, adding reality to the surreal. Geoff Zanelli elevates Klaus Badelt/Hans Zimmer's familiar themes, breathing new life in them even as he provides a fresh lighter acoustical touch that separates this score from the rehashed lazy strum und drang that plagued On Stranger Tides. Its a more intimate score that enhances the more emotional bent of this outing and adds to the circular heft of this tale, wherein the end meets the beginning. This film uses the past without becoming mired in it, while bringing events and story lines full circle.

Despite the odds against it, Pirates Of The Caribbean: Dead Men Tell No Tales is a tale worth being experienced. Like the ride that spawned it, you'll leave the film satisfied with a smile on your face. And if this the sunset by which the franchise sails away (as the story strongly hints), it is a fine tale for it to end on.
Posted by Paul Llossas at 11:12 AM 14 comments: 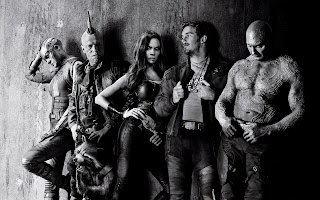