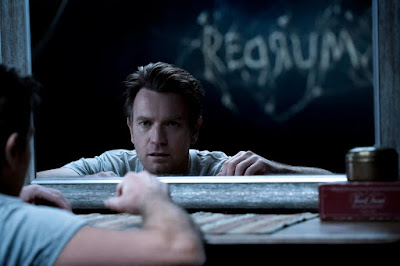 Sequels are tricky things. They rise and fall on a number of factors, not the least of which being the time gap between them; especially when a film is considered beloved and iconic, as in the case of The Shining (1980), which was released thirty-nine(!) years ago. One would expect that given those factors, no attempt at continuation could live up to that legacy. However, Doctor Sleep offers cure to that ailment of doubt.

The film takes place decades after the events of The Shining, where we find a grown-up yet down-on-his-luck Danny Torrence (Ewan McGregor), a vagabond who uses women and drink to try and drown the echoes of his traumatic past and dull his “shining” ability. However, when he comes across of similarly-gifted girl named Abra (Kyliegh Curran), who has become the target of a nomadic group of “shine” (or “steam”) eaters led by a sorceress known as Rose The Hat (Rebecca Ferguson), a reluctant Danny races against time to keep the girl alive. The road they embark upon leads them back to his past, where he must put the demons, both literal and figurative, finally to bed.

Despite Stephen King’s well-documented distaste for Stanley Kubrik’s adaptation of his earlier work, director/screenwriter Mike Flanagan wisely adapts the King-penned sequel novel as a direct sequel to Kubrik’s film, enlisting McGregor’s ability to emulate previously-established characters to help weave the events of this film into the overall narrative. McGregor completely nails Danny’s despairing, rudderless existence; an ironic consideration given that it’s his performance that anchors the film. The attention to detail is nothing short of exquisite; lovingly slavish (as well as one subtle in-story parallel to McGregor's most famous, also inherited role). The story homages and parallels the original in many ways; some obvious, some subtle, but melds organically within the narrative’s structure without distracting from the proceedings.

In this day and age, wherein the cinema has further embraced the so-called “roller coaster ride” nature of modern franchise blockbusters, an age where mutant powers of mind-manipulation and such are evidenced with increasing regularity, the question becomes how to differentiate its expression between the milieus of super-heroics and horror. The answer lies in characterization. Ferguson’s “Rose” may not have the mania of Jack Nicholson’s “Jack Torrence” or the chilling presence of Tim Curry or Bill Skarsgard, but she is a siren: beguiling, chilling, and deadly. Her troupe, the “True Knot” are also menacingly evil, with the standouts being "Crow Daddy" (Zahn McClarnon) and "Snakebite Andi" (Emily Alyn Lind), and the troupe engages in one of the most uncomfortably horrific scenes ever put to film, with the barest minimum of gore. The most horrific aspect, however, is the villains’ banality despite their supernatural abilities. The film’s pacing is slowly methodical, but never dull. Each scene is kinetic even when still and, just like Danny’s intentionally sublimated power, threatens to burst at any moment. Even more effective is the sense of Rose’s presence even when she’s not on screen. The Newton Brothers’ score also contains homages to Wendy Carlos’ orchestrations from The Shining, while using them in ways that ramp up that aforementioned tension within stillness.

This film echoes James Mangold’s Logan (2017) in terms of a grizzled veteran taking on the tutelage of an equally powerful adolescent, following similar beats. But unlike "Laura/X-23" of that film, Kyliegh Curran’s "Abra" is much more savvy, self-possessed, and self-assured. In many ways, she’s the film’s driving force. Her performance is such that she stands equal to McGregor, though she also has moments which remind us that she’s still a young teen involved in events beyond her control. Nevertheless, her character is a force to be reckoned with and Curran sells it. To say more would be to give away key plot points and surprises but suffice it to say that Carl Lumbly, Henry Thomas, Alex Esso, Cliff Curtis, and (especially) Jacob Tremblay do justice to their respective roles. The film is also sumptuous to witness. The cinematography by Michael Fimognari is sublime; it’s expansive nature quixotically enhancing the film’s oppressively bleak tone. The special effects are top notch with nary a blip to be found.

Much like the recently-released El Camino: A Breaking Bad Story (2019), Doctor Sleep continues the tale of a character whose fate was left uncertain at the conclusion of their original story. And, just like that film, Sleep provides a-more-than-satisfying continuation. It expands the mythos of the original story without diminishing it’s mystery or impact, yet also stands on its own foundation with moments and performances that will stay with you even after the credits have rolled. Far from having a somnambulist effect, Doctor Sleep may keep you up at night. It sucks you in and, like a vivid dream, you’ll have a hard time waking up…not that you would want to.

*Special thanks to Ian Erik Morris for editorial assist.