“THE HATEFUL EIGHT” Is Quentin Tarantino At His Best...and Worst. 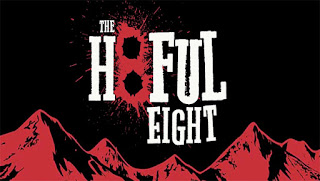 It’s safe to say that Quentin Tarantino is one of, if not the, most successfully controversial filmmaker in the past twenty years or so.  With (now) eight films under his belt, he has yet to produce an uninteresting or unprofitable film. His use of dialogue and mood is practically textbook. His movies have started some careers and famously revitalized others (John Travolta, Pam Grier, and Bruce Willis come to mind). He has managed to take a pastiche of the retro and manage to reassemble the pieces to seem something innovatingly fresh, even as their execution straddles the fine line between cinematic brilliance and sadistic exploitation. Some call him an auteur; others, a hack. Yet one thing remains certain: A new Quentin Tarantino release merits attention. Tarantino’s latest, The Hateful Eight, not only merits it, but boldly demands it.  Eight is Tarantino on steroids. All his cinematic bag of tricks is on display in exaggerated bas relief for better or worse. It is a melding of cinematic styles that both seductively entices as it viscerally repulses. It is his most passionate yet disturbing piece of cinematic art to date. Make no mistake...art, it is.

While the story is told in six chapters, its development is more appropriate to a three-act play. Set in the blizzard-ravaged mountains of Wyoming approximately a decade after the Civil War, ex-war hero turned bounty hunter Major Marquis Warren (Samuel L. Jackson) hitches a ride on a stagecoach run by O.B. Jackson (James Parks) with fellow bounty hunter John “The Hangman” Ruth (Kurt Russell), who is transporting his live bounty Daisy Domergue (Jennifer Jason Leigh) to hang in the town of Red Rock. They also come to pick up a man by the name of Chris Mannix (Walton Goggins) who not only may or may not be the Sheriff of Red Rock, but also harbors some deep seated prejudice against black folk. When the blizzard makes further progress impossible, they seek refuge at Minnie’s Haberdashery, which is occupied by the likes of Joe Gage (Michael Madsen); General Sandy Smithers (an ornery Bruce Dern); Oswaldo Mobray (Tim Roth), the ostensible hangman of Red Rock; and a Mexican by the name of Bob (Demian Bichir), who claims to be running the place in Minnie’s absence. As the storm grows harder, tensions run higher. Not everyone is who or what they seem, and it becomes clear as time passes that not everyone, if anyone, will get out alive.

One of Tarantino’s hallmarks is taking unsavory characters and making them, if not sympathetic, then at least relatable…infusing them with something approximating the redemptive. Nothing of the sort can be found in this film, the western equivalent of Jean-Paul Sarte’s No Exit and Dante Alighierif’s Inferno by way of an Agatha Christie whodunit.  The setting is the key, as the majority of the film takes place within the confines of the haberdashery. One of Tarantino’s greatest strengths as a storyteller has been his ability to create tension in even the most innocuous of circumstances.  Here, the tension is as taut as piano wire. Combined with the judicious use of noise and minimal use of soundtrack, coupled with the crisp visuals brought on by the 70 mm ultra Panavision process, the film engenders a stifling, vertiginous sense of claustrophobia ratcheted to an uncomfortable degree.

The main theme in this film is “subversion”, which takes its form in both characterization and expectation. The film plays with audience assumption, then turns same on its head in entertainingly sadistic fashion. Don’t expect to root for anyone. There are no true protagonists or antagonists; they’re all interchangeable within their respective interpersonal dynamics. Each character is, to varying degrees, as sympathetic as they are repulsive. More to the point, while not exactly a divine comedy, Tarantino’s wickedly subversive sense of macabre humor is more “in your face” than ever here. It’s bloody and gory, but the violence is incongruently stylized yet minimalist, and filled with gallows humor. The sadism comes primarily from the characters’ motivations. They revel in the horror they inflict. They’re horrid, loathsome, yet completely fascinating.

For the first time in any Tarantino production, Samuel L. Jackson receives top billing honors, and it’s much deserved just for his work in this film alone (if not for his combined body of work in Tarantino’s back catalogue) for the hypnotic portrayal of his character epitomizes the film’s subversive nature; but his is not the only sublime performance.  Kurt Russell seemingly revels in his portrayal of the “The Hangman” and his macabrely comedic interactions with Leigh as the even more unsavory and uncouth Domergue. Russell and Leigh’s chemistry is one of the film’s highlights as they play off each other antagonistically but in a weird, old married, spousal abuse couple kind of way (sharing a film for the first time since 1991's Backdraft). Tim Roth tries his best to channel Christophe Waltz in a part that, based on the script and direction, was most likely written with the latter actor in mind; however, Roth is gamely entertaining even as he effects what is essentially a Waltz impersonation (given that The Hateful Eight takes place in the same universe and time period as Django Unchained (2012), it’s just as well Waltz wasn’t or couldn’t be cast). As for the rest, Bruce Dern, Walton Goggins, Michael Madsen, Lee Horsley, Channing Tatum(!)…all the actors deftly realize their characters, even though Demian Bichir’s “Bob” borders on caricature (but then, given the movie genre Eight emulates, the representation is sadly appropriate). The most surprising performance next to Jackson’s belongs to Leigh. A case can be made that this film is extremely misogynistic (the disposition of the supporting female characters, played by actresses Dana Gourrier, Zoe Bell, and Belinda Owino, would bolster that argument); however, even here Tarantino pulls a bait-and-switch which Leigh’s sublime performance effectively nails. Even when just sitting in the background, you feel her presence. She’s a ticking time bomb, and when the explosion comes, it is chillingly fierce.  She was once considered one of the promising new actors of the late '80s/early '90s, Her performance proves that potential has not been diminished by time.

All the characters are compelling on their own merits, but none of which are anyone you’d wish to share a beer with.  But perhaps the most important player of the film never appears on screen. In a feat not even Clint Eastwood could perform, Tarantino convinced Ennio Morricone to score an(almost) original score for a western for the first time in 40-plus years (and the first original score for a Tarantino film ever). Morricone, however, himself thwarts expectation by presenting a score unlike any he had ever produced for the spaghetti westerns which made his fortune, while at the same time seamlessly fitting the film. Instead of majestic, sweeping epic orchestrations, the film’s main theme, which dominates the score, is low-key, foreboding, sinuously suspenseful, tensely nihilistic, and macabrely humorous all at once. For all of his talents, the mood Tarantino establishes would be diminished without Morricone’s contributions.

The Hateful Eight is a polarizing film. It is tantalizingly fascinating even as it’s abhorrent to witness. It's idiosyncratic and iconoclastic. The characters, to varying degrees are just, plain nasty; but through Tarantino’s lens, gleefully so.  It’s evil. It’s so good, it’s evil. It leaves you feeling dirty but not wanting to wash it off. It’s practically three hours long, but leaves you begging for more.  Tarantino attempts much in terms of style, themes, and presentation, and in varying degrees succeeds in each one.  Even more than Kill Bill Vols. 1 and 2, this is Tarantion’s most epic film to date.  It ensnares you in its presentation, and stays with you long after the end credits roll. This film encompasses everything Tarantino represents as a filmmaker. So, if you love Tarantino, you’ll love this film. If you hate Tarantino, you’ll really hate this film. There is no in-between.  It leaves such a visceral impact in the way that powerful art in any medium is supposed to engender. In all honesty, there’s much to ruminate over the film that cannot be extrapolated in a mere movie review.  It's either his best film or his worst depending on your sensibilities. Suffice it to say, for a film to do all of that, it merits…demands…viewing.
Posted by Paul Llossas at 11:20 AM 37 comments:

I don't mind admitting it; after all, we’re being sold fear.

Terrorists ply in it.

Politicians and pundits sell it.

Media, digital and social, subsists on it…thrives on it.

In our modern world of mass-communication, coverage of terror-inducing events 24/7 is inescapable.

9/11, France, Russia, San Bernandino, Sandy Hook; “355” is the current magic number…gun control, guns out of control…yet according to myth the first murder was committed with a rock, which is far more plentiful than guns…

Children kill parents and hold house parties while the corpses decompose in the upstairs bedroom.

Spouses kill each other over frivolous domestic disputes, and post it on social media for the world to see.

Shoppers send people to the hospital over a bargain TV.

A television actress brutalized by a homeless man for no discernable reason other than frenzied impulse.

My mother and her husband assaulted at gunpoint, the latter pistol-whipped, at a local pharmacy a couple of blocks from their home….

“They pull a knife, you pull a gun. He sends one of yours to the hospital, you send one of his to the morgue!”*

The world is a frightening, dangerous place on its own. Always has been and, despite our more lofty ideations, it would be jejunely Pollyannaish to believe otherwise. Humanity’s contributions are the overabundance at an all-you-can-eat-buffet. We were never promised a rose garden. We can only till the soil we're given.

“It’s a dangerous business…going out your door. You step onto the road, and if you don’t keep your feet, there’s no knowing where you might be swept off to.”**

I’m afraid and I live with that fear…but I refuse to live in fear. We must continue to live life as we choose to while respecting others’ right to live theirs, for this is a freedom that belongs to us all, and no fundamentalist of any persuasion has the right to take that away. This assertion has nothing to do with “letting terrorists win” rhetoric, but everything to do with the fact that we’re dying the moment we’re born; that at any second, through an outside agency having nothing to do with us or our circumstances, we’re here one moment and gone the next. Life is a finite commodity, and every moment spent cowering is a moment devoid of fulfilled expression.

"Pray for the dead. Fight like hell for the living."***

Be vigilant. Be protective. Be proactive. Know there are some things outside of your control, but you have the option to affect what you can.

Yes, I am afraid.

But as we breathe, we still live.

Make sure you do.