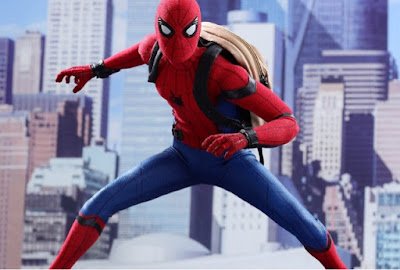 Spider-Man: Homecoming, directed by Jon Watts (sharing screenwriting credit with five other screenwriters) and starring Tom Holland, Michael Keaton, Robert Downey, Jr., Jon Favreau, Jennifer Connelly, and Marisa Tomei, is the latest hard reboot in the Spider-Man cinematic franchise, and the first to be done under the Marvel Studios umbrella. It is also, without equivocation, the most enjoyable of those films, even as it strays the furthest from its source material. As a title, Homecoming has its tongue firmly planted in cheek; an acknowledgement of the character's returning to the "Marvel fold", so to speak. However, it serves as an evocative declaration that this is a different sort of Spider-Man film, and indeed it is.

Following the events of last year's Captain America: Civil War, fifteen-year-old high school student Peter Parker (Holland) is chomping at the bit for another mission with The Avengers. Hoping to be called to action by Tony Stark (Downey Jr.), he instead finds himself being "nursemaided" by a reluctant, none-too-happy Happy Hogan (Favreau) and being told to keep his feet on the proverbial ground. When Parker stumbles upon a series of tech crimes being perpetrated by a gang led by Adrian Toomes (Keaton) and finds that the adults brush him off, its up to Spider-Man to try to save the day, while he attends high school, suffers indignities at the hands of bully Flash Thompson (Tony Revolori), try to approach his crush Liz (Laura Harrier), and avoid detention.

From the time the fanfare ushers the film's start, it practically proclaims an entertaining experience to come.  For example, instead of retreading on well-mined material (i.e., the actual origin, Uncle Ben), the story proceeds as if the audience is already familiar with those events. This alone would be refreshing even if it weren't so cleverly presented. The opening montage post-Marvel logo effectively recaps this Spidey's cinematic introduction from a different perspective while effectively establishing the tone, relationships, and conflicts going forward. Much like the opening shot of Robert Zemekis' Back To The Future (1985), it provides a subconscious shorthand that sets one up for what comes next. It's an impressive promise regarding storytelling, one that Watts and co. deliver on the entirety of the film's runtime.

As Marvel Studios expands its cinematic catalogue, there seems to be concerted effort to make each film and character unique in its own sub-world. In this case, Homecoming can be described as super-heroics by way of director John Hughes (indeed, director Watts has publicly stated this was the aesthetic he was going for). First and foremost, it's a coming of age story. It's about a teenager who's struggling with his own adolescence (who just happens to have arachnid abilities), and Watts presents the conflicts in Parker's normal life with as much weight as those inherent in his heroic identity. As such, don't expect the creepy stalker/self-assured possession of Tobey Maguire or the spastic twitching of Andrew Garfield. Here, Holland comes closest to his comic book counterpart's personality, his performance recognizing that Spider-Man's classic devil-may-care banter and bearing, mask Parker's adolescent insecurity. It would not be hyperbole to say that Holland's interpretation is a revelation except for the fact that he makes it seem so damn natural. There's not much suspension of disbelief required to believe he's a high school kid (even if he was 20 years old at the time principal photography concluded). He and his fellow classmates (with special kudos to Jacob Batalon as Peter's BFF/"chair man" Ned, and Zendaya as the snarkily-observant Michelle) are effectively convincing as high schoolers. But it's Holland who truly carries the weight of this film on his shoulders and, unlike the character he plays to a certain degree, he carries that weight effortlessly.

It's not just a coming of age story for Peter Parker. Surprisingly, given the considerable lack of screen time, this also works as one for the once and future Iron Man. The evolution of Stark's character over the course of a decade has seen him transform from an irresponsible man child to a mentor who "sounds like his father". Downey, Jr. plays up that undesired and uncomfortable change within the character in a satisfying turn. It's a change of perspective (one hinted at in Civil War), and inversion of character, that Watts exploits to great effect. Marisa Tomei's Aunt May is no dowager, but a thoroughly modern woman of certain charm, serving as basis for a film-long running gag.

But no hero can become one without a challenging villain. One of the main criticisms against the Marvel Cinematic Universe is the cookie-cutter, non-menacing nature of its villains (including Daniel Bruel's Helmut Zemo, though he was by far the most successful of them). That streak ends here with Michael Keaton, who takes arguably one of the lamest of Spider-Man's foes and makes him the most relatable, yet most effectively menacing and dangerous villains to date. His presence from his opening shot onwards elevates the film to a whole other level. His casting would bring about the requisite "from Batman, to Birdman, to Vulture" jokes, but his performance here is no laughing matter. His Vulture is a mixture of Carter Hayes' madness with Daryl Poynter's angst, Bruce Wayne's drive and Beetlejuice's mania. Yet for all that, it's a rare instance of understanding the motivations of the monster within, empathizing with him, yet still be in fear and awe of what he is capable of. Yet this role also proves how much he has developed as an actor, and how he has mastered the art of subtlety. One scene in particular stands out. Its a quiet one on the surface, but so full of subtext and nuance, it seems to belong more in a suspense thriller than a fantasy actioner. And yet his performance balances out Holland's with a wonderful give-and-take between actors that stands above the scenes that pre-and-proceed it. Rare on this blog are the words tour de force utilized, but this is one performance that merits the honorific. Keaton is nothing short of magnificent.

Another complaint levied against this film from its inception is how far it strays from the source material. Given the behind-the-scenes back and forth regarding studio rights of the character, this is to be expected. For example, a justifiable argument is that having Spider-Man's suit be comprised of Stark tech minimizes the Peter Parker character's genius. Watts and the screenwriters both acknowledge and invalidate said argument organically in story. In other words, the trick is in the presentation...and this presentation separates it from its predecessors by inverting those films' formula: less angst, more fun. This film is FUN, plain and simple. So much so, that it stands apart from the other Marvel Studios' films even as this film firmly entrenches the character in it. A viewer would be cynically jaded not to be caught up in Holland's enthusiasm as the character. The stunts and the CGI are flying on all cylinders, and the humor is organic and unforced (including an unexpected cameo used to comedic effect). Easter eggs for the initiated abound. Michael Giacchino's score is evocatively rousing as it pays a pleasing homage to the past. The story contains no filler, moving at a pace which keeps the character moments as engaging as the action sequences, and the requisite "Chekov's Gun" is present, though among the most subtly presented in these series of films; so much so that it's a genuine surprise to those not looking for it.

Spider-Man: Homecoming is an amazing film presented in spectacular fashion. Easily the best of the Marvel tales presented in the last few years, and, though this reviewer finds it slightly irksome that each stand-alone film is turning into a Marvel team-up, Homecoming is a stand-out film in its own right. Though it strays the most from the source material, with apologies (and thanks for setting the template) to Sam Raimi and Mark Webb, it's the best of Web-Head's cinematic adventures to date.  It entertains from first frame to last. Instead of groaning "another one", you'll demand "when's the next one".
Posted by Paul Llossas at 3:44 PM