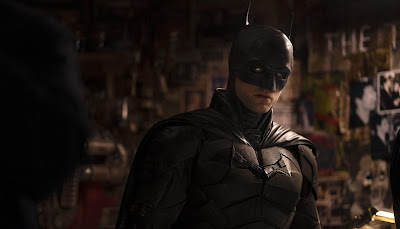 Matt Reeves' "The Batman" is a dense film. At three hours, it is overlong, filled with enough twists and turns to require Dramamine, and it has the most controversial lead casting since 1988. It is also perhaps the closest we've ever seen the comic book Batman translated to the screen.

Gotham City is a municipality under siege. An individual known only as "The Riddler" (Paul Dano) is grisly targeting the city's elite. Lieutenant James Gordon (Jeffrey Wright) is assigned to the case but his competence is called into question for his partnership with The Batman (an extremely effective Robert Pattinson). The duo's investigation is further complicated by the presence of Selina Kyle (Zoe Kravitz) and Oswald Cobblepot (Colin Farrell), whose involvement leads them further down a rabbit hole that leads to what could be the destruction of Gotham and its citizenry.

Director and co-screenwriter Matt Reeves reportedly told  Christopher Nolan that it was his intention to unseat "The Dark Knight" (2008) as the ultimate "Batman" film. While that will be a matter of debate for years to come, this film is a major contender for the title. It's reminiscent of Nolan's first effort, "Batman Begins" (2005) in that Gotham is itself a realized character with it's own identity; one without the matte genius of Anton Furst's Gotham for "Batman" (1989). Gotham City is nihilistically and darkly oppressive, where the light is subsumed and overwhelmed by the shadows even in the daytime. It could easily fit into the 90's aesthetic and intensity of David Fincher's "Se7en" (1995) and the noirish sensibilities of Michael Mann's "Heat" (1995); aesthetics that are bolstered by the stunning cinematography by Greig Fraser who, under Reeves' eye, turns each scene as a painting. And for the purists, Easter eggs abound that honor the past while bringing The Bat to the present.

Casting directors Lucy Bevan and Cindy Tolan should get bonuses for the talent they amassed on the screen. Jeffrey Wright is the most proactive not-yet-Commissioner Gordon ever put to film. Zoe Kravitz' Selina Kyle conveys the felinis catus traits without devolving to caricature; a fully realized individual in her own right with understandable motivations. Further, her chemistry with the lead is downright and naturally electrifying. John Turturro channels his inner Don Corleone to bring mobster Carmine Falcone to life, yet bringing a restraint to his performance that reminds one of why he was the darling of indie film. Perhaps the most entertaining performance of all comes by Colin Farrell, practically unrecognizable under the prosthetics to bring Oswald Cobblepot/The Penguin to life. He is clearly having the time of his life in the role and brings much needed levity this heavy film needs. Paul Dano's "Riddler" is no comic character. He is terrifying in ways that are almost banal and way too close to reality. He evinces moments of Frank Gorshin (look him up, young'ins) without the glee. His character is disturbed in a way that shakes one to the core. He could be Keyzer Soze, Jeffrey Dahmer; an animal in human form. However, his Riddler is also imbued in tragedy, one that calls out a major issue with the Batman mythos in these modern times.

The biggest question is, does the transition from one creature of the night to another work here? Back in the late 80s, I personally gave "Mr. Mom" (Michael Keaton) a chance and was pleasantly surprised (as was the rest of the world, given the high anticipation for the forthcoming "The Flash" attests to). Robert Patterson is more than just "Cedric Diggory" or "Edward". Just seeing "The Lighthouse" (2019) could convince naysayers in my opinion. As the titular character, Pattinson delivers the honest goods. His Batman is cold, focused, intimidating, and intelligent. He effectively uses his body language to convey menace in an outfit that could invite ridicule in lesser hands, and the rage he evinces is shockingly palatable. Some would take issue with his interpretation of alter ego Bruce Wayne as he seems to play it like an emo goth (an analogy that ties in with the role Pattinson is most famous [until now] for). But if one pays close attention, it befits this character interpretation. It's a performance that merits the fact that this is the first Batman film since "Batman Begins" where the focus is primarily ON Batman/Bruce Wayne. He's the main character, not a guest star in his own film; which makes the question of which is the mask and which is the reality all the more potent. (The film does provide its own answer to that question). If there's any actor that gets the short shrift in screen time, it's Andy Serkis as faithful butler Alfred Pennyworth. However, Reeves ensures that the character, and his dynamic with Bruce, isn't wasted; leading to a powerfully poignant development.

In this writer's estimation, Michael Giacchino can do no bloody wrong. Though repetitive, his score is a character in its own right, giving auditory heft to the unfolding events, capturing each moment's mood and ambiance. It in turn thrums and rhapsodizes, engendering anxiety, tension, fear, and romance.

This film will be a divisive one, as it is fully reflective of a post-2000 zeitgeist. It is, as all good art is, timely as there are hints of climate change and political commentary. It's definitely a younger generation's Batman. But that's how it should be. Every generation deserves its own iteration. The fact that Matt Reeves is able to deliver timelessly recognizable characters and myths into modern sensibilities, is nothing short of a revelation.

The bat signal shines again. Batteries to power, turbines to speed. Roger and move out to your local theater and watch the experience that is "The Batman".