OCCUPY [FILL IN THE BLANK] - THE AMERICAN WAY

Words are neither good nor evil. They simply are. It's how they are used contextually that deems how they are perceived. Take, for example, "Hitler" (Yes, I know Hitler is a name and not a word, but go with it for a moment) How does the mere mention of the name make you feel? Hard to believe that prior to the 1930s, the name no more evocative than "Smith". Now, that word/name is synonymous with depraved evil; so anathema is the very concept behind that name that anyone who uses it for the purposes of comparison risks vilification, as Hank Williams, Jr. found to his chagrin. Now, neither am I condoning nor condemning his comparative usage as the comparison between Hitler and President Obama was an arguably tenuous and far-fetched connection in my opinion. However, "Hitler", if history is any indication, will be forever associated with worst that humanity can offer. That is the power of context.
Now let's take another word, one that is often associated with Hitler, or any other world dictator: "Occupation". Among its many definitions includes: possession, settlement, or use of land or property or the act or state of occupying. To many previously conquered nations, "occupation" is a dirty word (of course, not so to the victors). Yet "occupation" is just a word, neutral in and of itself. It is only the context that determines or ascribes an intent to it. Or, as Hamlet so eloquently put it in Act 2, Scene ii of the eponymous Shakespeare play: "...[T]here is nothing either good or bad, but thinking makes it so."
Which brings in the topic of the current cultural trend towards "occupation": Occupy Wall Street, Occupy Miami, Occupy [Fill In The Blank]. Is "occupation" a good or bad word? Again, it depends on who you ask. There are those political pundits that would assert that these occupations are nonsense and somehow un-American. I ask - - "how"? This country was predicated upon the ideal of free speech; an ideal which makes for the First Amendment in our United States Constitution:


"Congress shall make no law respecting an establishment of religion, or prohibiting the free exercise thereof; or abridging the freedom of speech, or of the press; or the right of the people peaceably to assemble, and to petition the Government for a redress of grievances."


So far, the demonstrations have been, for the most part, peaceful; for the most part simply due to the fact that Google and Bing searches will yield results wherein incidents of violent altercation will be found and, unfortunately, in many of those cases those sources will carry a slant as to who was victim and victimizer. Again, it is perception at work. For example, look at this link from buzzfeed.com: http://www.buzzfeed.com/mjs538/violent-pictures-from-occupy-wall-street-protests.


It provides a play-by-play of a protest demonstration gone wrong almost a month ago. The site does say to "judge for yourself" but the photos are both disturbing and incendiary. Did the protesters deserve the treatment received? Did the police overreact without provocation? Is there any way to truly know? What is your perception on the matter? Remember, media obfuscation occurs on both sides. Look at it this way: How many times have you heard that the protests are disorganized because there supposedly are no clear cut demands, or the claims that no one, even the protesters themselves, (remove "know", add "really knows") what they want? And how many times have you heard that what they want is myriad; that it cannot be put in succinct terms? Maybe that's an issue in the media: Not just that corporations that own media outlets dictate the agenda, but also that the protesters’ demands cannot be encapsulated by a simple, catchy sound bite.
I bring this up because perception is key to this issue. The protests have been described as being "capitalists" versus "socialists", "haves" versus "have nots" and in some respects "good” versus “evil”. Yet these terms (with the exception of "capitalist" and "socialist" ) are subjective. What's good for the capitalist is evil for the socialist, and vice versa. Two ideologies at war with each side believing theirs is right.


It is too complex an issue to try to resolve on a simple blog post. But this particular post is all about perception and how it can galvanize people into action. A perceived threat brings about action. Throughout all this, the focus of the protests seem to be to get big business, the banking system and ultimately our government to notice that people are fed up. Yet it could be that these demands are nothing but a dismissive nuisance to the purported 1% that controls the country's wealth (a wealth determined by a Reserve banking system that is not answerable to the United States government, but I digress). In the face of that, some may lose hope.
However, perhaps what is required going forward is a change in perception in the mission. Instead of trying to wake up Wall Street, focus on the fact that the numbers have grown and thousands of others are taking up the call to (remove "protesting") arms. In this case, occupation is not a dirty word. Nay, it is a right granted to all Americans by the very document that serves as its ideological foundation; one that allows us as citizens to assert our rights and freedoms which were paid for with the lives of our country's forefathers and military. We may not agree with the views of others, but we should protect the right to express them with our very lives, if necessary.
The current system is obviously broken and requires a fix that threatens the power base of the few that control the nation’s wealth. Government must listen to the voices of those they govern, and if it does not do so voluntarily it must be made to. Yet Government cannot hear its citizenry if their voices are halted in indifferent silence. 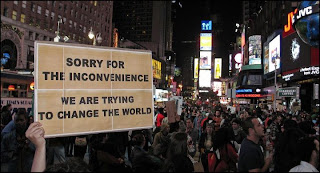 In this case, "Occupation" is not a dirty word...it is the American Way.
Posted by Paul Llossas at 9:25 AM