ABORT MISSION: Too Many Cooks Cause Suicide Squad To Commit The Act [MINOR SPOILERS] 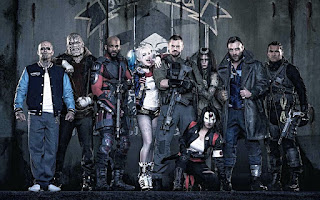 That refrain played in a loop in my head as I watched David Ayer’s Suicide Squad, the latest film in Warner Bros./DC Comics' cinematic franchise. Unfortunately, it’s all pomp with very little by way of circumstance going for it.

After the events of Man of Steel (2013) and Batman v. Superman: Dawn of Justice (2016), government agent Amanda Waller (Viola Davis) assembles a wetwork team of super-villains to take on end run missions that have minimal chances for survival and act as a metahuman deterrent. Among the villains she’s selected for the task are Floyd Lawton/Deadshot (Wil Smith), the assassin who never misses; Captain Boomerang (Jai Courtney), a loutish, uncouth master of the boomerang; El Diablo (Jay Hernandez), a gangbanger with a fiery personality; Slipknot (Adam Beach), a rope-gimmick assassin; Killer Croc (Adewale Akinnoye-Agbaje), a deformed monstrosity; The Enchantress (Cara Delevingne), an ancient sorceress currently possessing the body of scientist June Moon; and Harley Quinn (Margot Robbie), moll of The Joker (Jared Leto), and a formidable psychopath in her own right.  The team is held in check by team leader Rick Flag, Jr. (Joel Kinnaman) and the resident martial artist with a soul trapping sword Katana (Karen Fukuhara).

“Suicide Squad” was a 1950’s DC Comic about four government agents who, under the Task Force X program, took on covert suicide missions the United States couldn’t touch during the Cold War. The title was revived in the mid-80’s for one purpose: copyright retention; i.e., “use it or lose it.” Writer John Ostrander revamped the concept so that super-villains were blackmailed into taking on those missions in exchange for commuted sentences (and limb/head retention). Whereas Ostrander and his wife Kim Yale (with artists John Byrne, Luke McDonnell, and Karl Kesel, among others), were able to churn out a suspenseful and successful comic out of a business necessity, Suicide Squad the film feels like it was solely made simply to keep the copyright alive.

Aesthetically, the film is a super-villain pastiche of The Dirty Dozen (1967) and Mission: Impossible (take your pick). In terms of structure and presentation, the more applicable film to reference would be The Good, The Bad, and The Ugly (1966), with the breakdown being as follows:

Individual performances:  Taking into account Hollywood’s penchant for not being wholly faithful for the source material, one has to expect liberties with characterization going in. That said, Smith seems to be having a good time as Deadshot, even if he does deliver a moment of cringe-worthy line delivery here and there. Then, there’s Viola Davis’ Amanda Waller. This character may have been previously seen on live action shows such as Smallville and Arrow, but Davis’ take is by far the closest to the source material, and just as formidable. She’s tough and unlikable…the way Waller is supposed to be. Yet Davis hits the right beats to keep her character engaging. Jai Courtney finally finds a role of note in Boomerang, whose despicable character is somewhat entertaining (even if he’s given a fetish affectation as comedic shorthand) and frankly, like Smith, Courtney looks like he’s having the most fun he’s had on a film set. The most poignant of the bunch is Hernandez’ Diablo, whose reluctance to use his abilities come from a backstory that renders him the most sympathetic in the cast. Then, there’s Robbie’s Harley Quinn. Robbie captures most of the source character’s characteristics in what should have been a major break out role, but isn’t; reasons for same being cited below.

Ambition:      Suicide Squad is an ambitious film. To present a perception of a shared cinematic universe through the eyes of its villains is a bold choice to make; an opportunity to view its world (and the heroes that inhabit it) through a different set of glasses.

Homages/Easter Eggs:  Without spoiling anything, there are enough of them in this film presented in such a way to bring a smile to long time DC fans’ faces without taking the non-initiated out of the film (there are other reasons for that happenstance to take place).

The Visuals:  Color is used in a way here that was decidedly lacking in the first two DC Cinematic Universe offerings. It unapologetically uses bright, vibrant, primary colors to great effect, juxtaposing with the more muted and dour visuals of the film.

The First Thirty Minutes:    Despite it seeming to take forever in exposition, the first thirty minutes of the film effectively establishes each character and their initial motivations as they are introduced.

Performances as A Collective Whole:  One of the greatest hurdles in any ensemble film, especially a film of this type, is the character juggling. Some films do it deftly, such as The Wild Bunch (1969). Suicide Squad is not that film. Motivations change at the drop of a hat. Granted, the argument to be made is that these are “evil” mercenaries and should have pliable motivation. In this case, though, it’s more bean-counter arbitrariness than it is in-story development. There are hints of development (such as in the cases of Boomerang and Croc), that are summarily dropped. These arcs, such as they are, lead nowhere. Other performances pander: Some expected (Harley Quinn), some groan inducing (The Enchantress); the latter to the brink of eye rolling.

The Music:    On the surface, there is nothing wrong with it. Steven Price’s score is unrelentingly edgy, and some of the pop/rock inclusions to the soundtrack are inspired for the given situations and/or characters. However, the film is too peppered with the latter and the former inadvertently adds to the disjointed nature of the film itself.

Narrative/Tonal Schizophrenia:  Plot? What plot?  It's not even worth mentioning David Ayer’s screen writing or direction because, even if there stories about the behind the scenes re-writes and re-shoots didn’t already about, the film as a structural and tonal narrative is a disjointed mess. The only thing approximating cohesion appears in the first 30 minutes. After that, it all goes to dung up. Ill-defined character motivation aside, the film’s overall aesthetic falls somewhere between post-apocalyptic chic and a MadTV episode. This is perhaps the most perplexing aspect of Suicide Squad.  Both Man of Steel and Batman versus Superman embraced sturm und drang grim and gritty, an aesthetic that is tailor-made for the this film. However, instead of owning the angst and depravity, we’re presented with a sanitized film more Hot Topic than hard core, wavering uncomfortably between callous violence and a more lighthearted romp reminiscent of Deadpool (but without its wit or willingness to laugh at itself).  One can practically point out scenes where Standards-and-Practices demanded changes. The movie jerks with so many starts and stops that it's like driving a stick-shift without the knowledge of how to do so. It’s jarring and minimizes the very nature of the Squad.

One Particular Performance (Why So Serious?):

The biggest draw for this film is Leto's Joker, and it’s his performance that most divisive and epitomizes Flav’s choral rallying cry. In all fairness to Leto, he does try his best step away from the mold created by his predecessors. This would be great…if there were something in the performance that said “Joker." There's very little to differentiate Leto’s take from any other psychopathic crime boss in recent cinema. It’s a self-involved performance that is more quirky for its own sake than character building, and he’s about as scary as a mime performing interpretive dance. Nevertheless, the Joker is extraneous to the film. He adds nothing to the narrative as a whole, much less to the lore of The Joker. It's an extended and unsatisfying cameo; one that could not live up to the hype building up to it. His Joker would have been better served in flashback and hiding behind the scenes, rather than interacting with the Squad.

What's Love Got To Do With It:

Speaking of the Harley/Joker dynamic, the two are not supposed to be a love affair of the ages, but rather the personification of spousal abuse and Stockholm Syndrome. Throughout his history, despite an occasional hiccup, The Joker is an irredeemable figure whose character is the epitome of chaotic evil. Yet this film humanizes him to the extent of giving him a redemptive aspect via Harley. Not only does this run counter to any previous take of The Joker, but it does Harley, and her agency, a disservice. This take implies that Harley is somewhat sane, because she is seeing something tangible that other people don't...his ability to care about someone. In the comics, Harley is a tragic but resolute figure as she has survived the abuses heaped upon her by “Mistah J”, even if her psyche hadn’t. Their insanity, and their core characters, are diminished both individually and as a couple. Word is that there are scenes regarding the Joker that show he only values Harley as property (if he values her at all). Despite the seemingly interminable runtime, the characters would have been better served if said scenes were included. As such, the relationship is one of the film’s biggest missteps.


Personally speaking, I really wanted to like this film. The tonal about-face from the previous films comes as quite a shock. There were a lot of elements here that had a lot of potential to make it the DC Universe’s version of Pulp Fiction, if not Inglorious Basterds.  The actors are all game, but there's very little in the film for them to sink their teeth into. Their performances are, given the film’s limitations serviceable. They inhabit their characters, but there's nothing that makes one clamor to see any of them again in an ensemble piece or a solo film (the exception being Robbie, because she gives enough to make you wonder what she’s capable of in the role with a good script). In truth, one would be better off watching the 2014 animated feature Batman: Assault on Arkham if one wants a satisfying Suicide Squad tale. Though it will no doubt make a ton of money for Warner Bros. just out of sheer curiosity alone, despite having some arguably fun (if not enjoyable) moments, Suicide Squad is, on the whole, a spectacular failure. One would have expected, given the antihero-as-protagonist conceit and the subject matter, this film to be a slam dunk. However, the film is nothing but fumble after fumble. It’s not enough to ask for a time out. It makes you want to call the game.