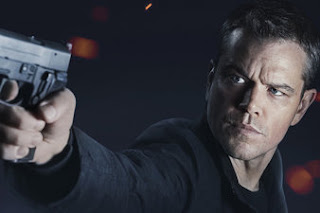 Eight years is a long time; especially in pop culture, more so in films, and most with franchise films which, by their very nature, tend to become more formulaic in execution as time goes on. And the longer the time, greater the frequency of the buzzword “reboot”. One need look no further than Sony’s Spider-Man series as a prime example, since it was rebooted within four years between films. More recently, the body heat from Christian Bale’s batsuit had barely cooled before Ben Affleck arrived to sweep the Nolan films under a proverbial rug. By the same token, it hasn't stopped Hollywood from churning out films way beyond their expiration date to mixed to negative result (Independence Day, anyone?). The most relevant example here was the tepidly received The Bourne Legacy (2012), a stealth reboot made a scant five years after the end of The Bourne Ultimatum (2007). For all intents and purposes, Ultimatum tied the story of amnesiac assassin David Webb/Jason Bourne (Matt Damon) into a satisfactory, if not totally neat, bow. His journey concluded and his identity reclaimed, Bourne dismantled Treadstone and swam off into the ocean depths and into self-imposed obscurity. However, Legacy's poor critical and financial reception made one thing clear...No Matt Damon, no Bourne.

Eight years later (and some time after Legacy), ex-CIA agent turned hacker Nicky Parsons (Julia Stiles) hacks into the CIA mainframe and uncovers not only a more insidious program than Treadstone, but also more information about Jason Bourne. Unfortunately, her efforts are uncovered by Agent Heather Lee (Alicia Vikander, The Man from U.N.C.L.E.) who, after alerting CIA Director Robert Dewey (Tommy Lee Jones) of the breach, targets Parsons for extraction. These events force Bourne out of hiding, and the cat-and-mouse hunt Bourne so desperately wished to leave behind begins anew.

As a film, Jason Bourne manages to mine the same territory while still remaining disturbingly topical. The technology has advanced, with all pervasive surveillance the result. Given the subject matter, it serves as sad indictment on our current socio-political climate. Returning director Paul Greengrass, with scriptwriter Christopher Rouse, brings all our current fears and questions regarding social media and privacy as the basis for the bare bones plot, along with an extra wrinkle to Bourne’s backstory to justify his return from exile; a wrinkle which seems to go coincidentally overboard in execution.

But despite the advances in technology, the story’s execution is familiar…so familiar that it falls into self-plagiaristic predictability (the very first chase scene is practically plucked from The Bourne Supremacy (2004)). It is not to say that the film isn’t satisfactory; quite the contrary. The action doesn’t let up from the moment it starts until the moment it ends. The fights and the stunts have been, by necessity, ratcheted up. For all that, however, there’s a strange lack of urgency in the proceedings, despite the ripping soundtrack by franchise orchestrator John Powell with assist by David Buckley. Perhaps it’s because the story beats are so subconsciously familiar that there’s very little sense of risk involved.

Perhaps that lack of urgency also stems from the fact that Jason Bourne is not as emotionally vulnerable as he was in the original trilogy. Jason was a killing machine, but his almost existential quest for identity humanized him to a great degree. Here, weathered of face, hardened in countenance, and armed with a hard won sense of self, Damon plays him as a self-assured, taciturn Terminator resolute with purposeful determination and a seething rage bubbling below the surface. Yet, Damon’s performance is such that a different sort of vulnerability evinces itself which keeps his character from delving into self-parody. By the same token, it’s a logical evolution of the character and Damon realizes it. Yet, at the same time, his capability minimizes the efforts of his foes, which includes a particularly vicious “asset” (Vincent Cassel, who co-starred with Damon in both Ocean’s Twelve and Thirteen) with a major axe to grind. Cassel and Damon’s performances are inverse to previous asset antagonism as it is Cassel who’s the more emotionally invested assassin, thereby highlighting how much more self-contained and efficient Bourne has become. It’s one of the few surprises and highlight of the film.

Standing in for Joan Allen’s Pam Landy (who is indisposed after the events of Legacy), Alicia Vikander’s plays Heather Lee as a capable cipher, whose allegiance and motivations are in question throughout the film. She provides counterpoint to the more taciturn, scheming turn provided by Jones’ Dewey. Riz Ahmed has a MacGuffin-type role as Mark Zuckerberg-analogue Aaron Kalloor whose importance to the story is cursory at best. Regardless of this, all the performers make their characters engaging and hold audience interest.

Jason Bourne is an action packed but familiar thriller; a roller coaster ride of action and suspense even if it is not as viscerally engaging as its predecessors. Matt Damon is the reason these films exist past The Bourne Identity, and he is the reason to see this film. While he could have easily phoned in a well-worn performance, he invests it with an intensity and new perspective that gives a  freshness to an old cinematic friend, and reminds us why he is considered one of the best actors of his generation. The film’s title implies a new beginning/stand-alone aspect to this feature, signaling a continuation without being so mired to a past the series as a whole is tethered to. Sometimes, continuing a story after its natural conclusion leads to an unsatisfactory artistic denouement. On the other hand, other projects like Smallville and Supernatural thrived once they surpassed their initial mission statements. Time will tell on which side of that coin Jason Bourne will fall on.
Posted by Paul Llossas at 2:42 PM